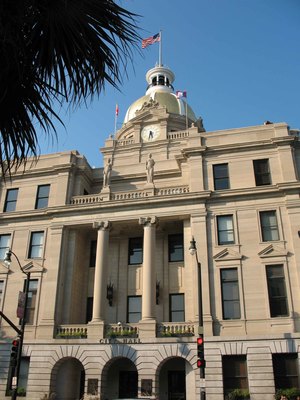 Savannah City Hall 2, GA. Savannah’s City Hall was built between 1903 and 1906, a period of great growth for the City of Savannah. At the time of its construction, city officials announced they were erecting “a building for a century to come.” City Hall has now been the headquarters of the City of Savannah municipal government for one hundred years. It was designed by Architect Hyman Wallace Witcover. It is a Revival Renaissance structure made of granite and limestone exterior. The copper dome was first gold leafed in 1987.