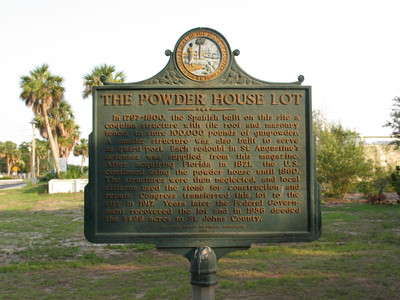 " In 1797-1800, the Spanish built on this site a coquina structure with tile roof and masonry fence, to store 100,000 pounds of gunpowder. A similar structure was also built to serve as guard post. Each redoubt in St. Augustine's defenses was supplied from this magazine. After acquiring Florida in 1821, the United States continued using the powder house until 1860. The structures were then neglected, and local citizens used the stone for construction and repair. Congress transferred this lot to the city in 1917. Years later the Federal Government recovered the lot and in 1956 deeded the 14.99 acres to St. Johns County."