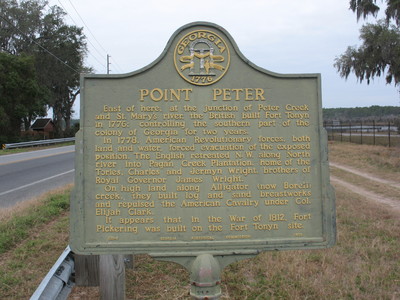 This marker is located on Osborne Street and Point Peter Road, St. Marys in Camden County.

" East of here, at the junction of Peter Creek and the St. Marys river, the British built Fort Tonyn in 1776; controlling the southern part of the colony of Georgia for two years. In 1778, American Revolutionary forces, both land and water, forced evacuation of the exposed position. The English retreated N.W. along North river into Pagan Creek Plantation, home of the Tories, Charles and Jermyn Wright, brothers of Roayl Governor James Wright. On high land along Alligator (now Borell) creek, they built log and sand breastworks and repulsed the American Cavalry under Col. Elijah Clark. It appears that in the War of 1812, Fort Pickering was built on the Fort Tonyn site.