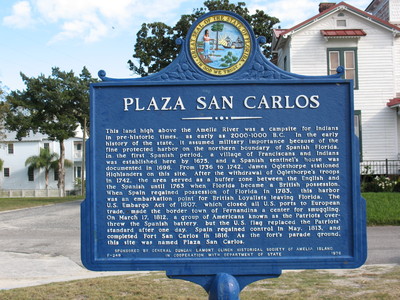 " This land high above the Amelia River was a campsite for Indians in pre-historic times, as early as 2,000-1,000 B.C. In the early history of the state, it assumed military importance because of the fine protected harbor on the northern boundary of Spanish Florida. In the first Spanish period, a village of Franciscans and Indians was established here by 1675, and a Spanish sentinel's house was documented in 1696. From 1736 to 1742, James Oglethorpe stationed Highlanders on this site. After the withdrawal of Oglethorpe's troops in 1742, the area served as a buffer zone between the English and the Spanish until 1763 when Florida became a British possession. When Spain regained possession of Florida in 1783, this harbor was an embarkation point for British Loyalists leaving Florida. The U.S. Embargo Act of 1807, which closed all U.S. ports to European trade, made the border town of Fernandina a center for smuggling. On March 17, 1812, a group of Americans known as the Patriots overthrew the Spanish battery, but the U.S. flag replaced the Patriots' standard after one day. Spain regained control in May, 1813, and completed Fort San Carlos in 1816. As the fort's parade ground, this site was named Plaza San Carlos."

Sponsors: sponsored by General Duncan Lamont Clinch, Historical Society of Amelia Island in cooperation with the Florida Department of State