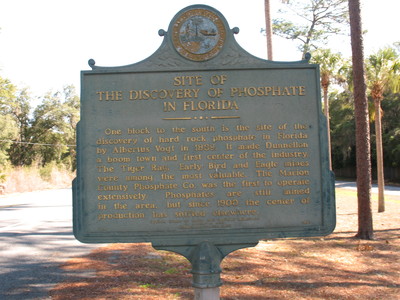 Dunnellon is a small quiet area that is developing today where a hardy adventurer whose nickname was " Duke of Dunnellon" discovered hard rock phosphate on May Day 1889. Albertus Vogt, engineer, U.S. Marshal, journalist, world traveler and adventurer, settled down here after his exciting experiences.

This marker is located on County Road 40 in Marion County, Florida. The text on the marker reads as :

" One block to the south is the site of the discovery of hard rock phosphate in Florida by Albertus Vogt in 1889. It made Dunnellon a boom town and first center of the industry. The Tiger Rag, Early Bird and Eagle mines were among the most valuable. The Marion County Phosphate Co. was the first to operate extensively. Phosphates are still mined in the area, but since 1900 the center of production has shifted elsewhere."

Sponsors: Florida Board of Parks and Historic Memorials in Cooperation with Dunnellon Garden Club