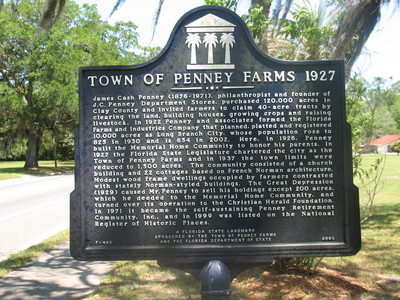 This marker is located on Oakridge Avenue in Clay County In Florida.

" James Cash Penney (1876-1971), philanthropist and founder of J.C. Penney Department Stores, purchased 120,000 acres in Clay County and invited farmers to claim 40-acre tracts by clearing the land, building houses, growing crops and raising livestock. In 1922 Penney and associates formed the Florida Farms and Industries Company that planned, plated and registered 10,000 acres as Long Branch City, whose population rose to 825 in 1930 and is 654 in 2002. Here, in 1926, Penney built the Memorial Home Community to honor his parents. In 1927 the Florida State Legislature chartered the city as the Town of Penney Farms and in 1937 the town limits were reduced to 1,500 acres. The community consisted of a church building and 22 cottages based on French Norman architecture. Modest wood frame dwellings occupied by farmers contrasted with stately Norman-styled buildings. The Great Depression (1929) caused Mr. Penney to sell his holdings except 200 acres, which he deeded to the Memorial Home Community, and turned over its operation to the Christian Herald Foundation. In 1971 it became the self-sustaining Penney Retirement Community, Inc., and in 1999 was listed on the National Register of Historic Places."

Sponsors: the town of Penney Farms and the Florida Department of State - 2002