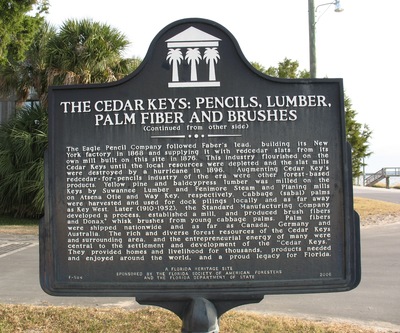 The text. reads as : Continued from Side 1 :

" The Eagle Pencil Company followed Faber's lead, building its New York factory in 1868 and supplying it with red cedar slats from its own mill built on this site in 1876. This industry flourished on the Cedar Keys until the local resources were depleted and the slat mills were destroyed by a hurricane in 1896. Augmenting Cedar Key's red cedar-for-pencils industry of the era were other forest-based products. Yellow pine and bald cypress lumber was milled on the Keys by Suwannee Lumber and Fenimore Steam and Planing mills on Atsena Otie and Way Key, respectively. Cabbage (sabal) palms were harvested and used for dock pilings locally and as far away as Key West. Later (1910-1952), the Standard Manufacturing Company developed a process, established a mill, and produced brush fibers and Donax® whisk brushes from young cabbage palms. Palm fibers were shipped nationwide and as far as Canada, Germany, and Australia. The rich and diverse forest resources of the Cedar Keys and surrounding area, and the entrepreneurial energy of many were central to the settlement and development of the "Cedar Keys." They provided homes and livelihood for thousands, products needed and enjoyed around the world, and a proud legacy for Florida."

Sponsored or placed by: The Florida Society of American Foresters and the Florida Department of State