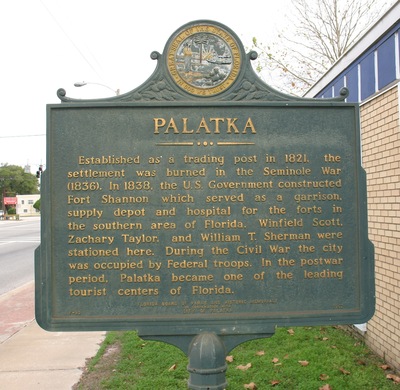 This marker is located on SR 100 in front of the Police Station in Putnam County.

" Established as a trading post in 1821, the settlement was burned in the Seminole War (1836). In 1838, the U.S. Government constructed Fort Shannon which served as a garrison, supply depot and hospital for the forts in the southern area of Florida. Winfield Scott, Zachary Taylor, and William T. Sherman were stationed here. During the Civil War the city was occupied by Federal troops. In the postwar period, Palatka became one of the leading tourist centers of Florida. "