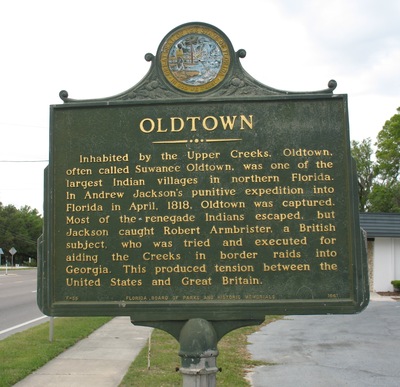 This marker is located on U.S. Highway 19 in Oldtown Florida.

The text on the marker reads as : " Inhabited by the Upper Creeks, Old Town, often called Suwanee Old Town, was one of the largest Indian villages in northern Florida. In Andrew Jackson's punitive expedition into Florida in April, 1818, Old Town was captured. Most of the renegade Indians escaped, but Jackson caught Robert Armbister, a British subject, who was tried and executed for aiding the Creeks in border raids into Georgia. This produced tension between the United States and Great Britain."

Sponsored or placed by: Florida Board of Parks and Historic Memorials