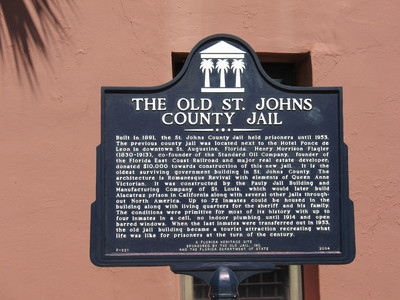 This marker is located at the Old Jail Museum on State Hwy 5a, St. Augustine, Florida.

" Built in 1891, the St. Johns County Jail held prisoners until 1953. The previous county jail was located next to the Hotel Ponce de Leon in downtown St. Augustine, Florida. Henry Morrison Flagler (1830-1913), co-founder of the Standard Oil Company, founder of the Florida East Coast Railroad and major real estate developer, donated $10,000 towards construction of this new jail. It is the oldest surviving government building in St. Johns County. The architecture is Romanesque Revival with elements of Queen Anne Victorian. It was constructed by the Pauly Jail Building and Manufacturing Company of St. Louis, which would later build Alcatraz prison in California along with several other jails throughout North America. Up to 72 inmates could be housed in the building along with living quarters for the sheriff and his family. The conditions were primitive for most of its history with up to four inmates in a cell, no indoor plumbing until 1914 and open barred windows. When the last inmates were transferred out in 1953, the old jail building became a tourist attraction recreating what life was like for prisoners at the turn of the century."

Sponsors: the Old Jail, Inc. and the Florida Department of State