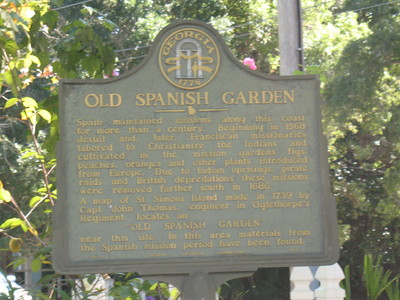 " Spain maintained missions along this coast for more than a century. Beginning in 1568 Jesuit and, later, Franciscan missionaries labored to Christianize the Indians and cultivated in the mission gardens figs, peaches, oranges, and other plants introduced from Europe. Due to Indian uprisings, pirate raids, and British depredations these missions were removed farther south in 1686.

A map of St. Simons Island made in 1739 by Captain John Thomas, engineer in Oglethorpe’s Regiment, locates an “OLD SPANISH GARDEN” near this site. In this area materials from the Spanish mission period have been found."