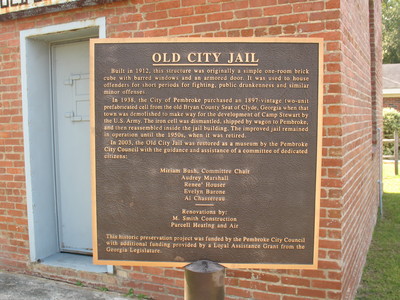 This marker is at the intersection of W. Gibson St. and S. College St., Pembroke, GA. In 2003 the Old City Jail was restored as a museum by the Pembroke City Council. Originally built in 1912 it was simple one room brick cube used for house offenders.

" Built in 1912, this structure was originally a simple one-room brick cube with barred windows an armored door. It was used to house offenders for short periods for fighting, public drunkenness and similar minor offenses. In 1928, the City of Pembroke purchased an 1897- vintage two-unit prefabrication cell from the old Bryan County Seat of Clyde, Georgia when that town was demolished to make way for the development of Camp Stewart by the U.S. Army. The iron cell was dismantled, shipped by wagon to Pembroke, and then reassembled inside the jail building. The improved jail remained in operation until the 1950s, when it was retired. In 2003, the Old City Jail was restored as a museum by the Pembroke City Council with the guidance and assistance of a committee of dedicated citizens: Mariam Bush, Committee Chair Audrey Marshall • Renee´ Houser • Evelyn Barone • Al Chassereau Renovation by: M. Smith Construction • Purcell Heating and Air."

This historic preservation project was funded by the Pembroke City Council with additional funding provided by a Local Assistance Grant from the Georgia Legislature."

Sponsored in 2003 by Pembroke City Council.