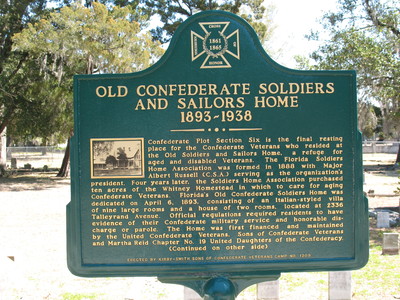 This marker is located in the "Old City Cemetery" in downtown Jacksonville, in Duval County, Florida.

" Throughout the years, Florida U.D.C. Chapters gave generously of their time and resources to meet the needs and provide luxuries to the beloved veterans. Confederate organizations of years past acknowledged that the aged soldiers were "a living monument to the War Between the States" and should be cared for, protected and honored. In the years between 1893 and 1938 the number of veterans in the Home ranged from as few as three to as many as forty-seven. For forty years the Home operated and survived on State Florida's Confederate home remained in operation until 1938, when the last veteran died. When the property was sold, the State Commander of the United Confederate Veterans transferred funds to the State of Florida for the establishment of an endowment fund to be used for scholarships at the Florida State College for Women (FSU) and the University of Florida."

Erected by Kirby Smith Sons of Confederate Veterans Camp No.1208.