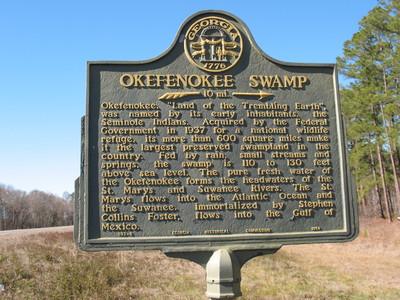 " Okefenokee, "Land of Trembling earth", was named by its early inhabitants, the Seminole Indians. Acquired by the Federal Government in 1937 for a national wildlife refuge, its more than 600 square miles make it the largest preserved swampland in the country. Fed by rain, small streams, and springs, the swamp is 110 to 130 feet above sea level. The pure fresh water of the Okefenoke forms the headwaters of the St. Mary´s and Suwanee Rivers. The St. Mary´s flows into the Atlantic Ocean, and the Suwanee, immortalized by Stephen Collins Foster, flows into the Gulf of Mexico."

Sponsored by the GEORGIA HISTORICAL COMMISSION.