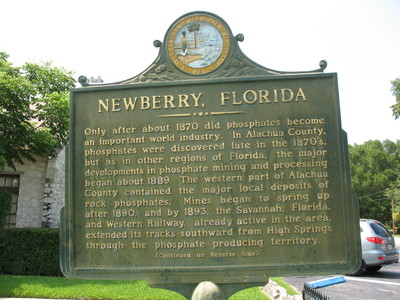 This marker is located on US Highway 26, in Newberry, Florida.

It reads as : ( Side 1 ) " Only after about 1870 did phosphates become an important world industry. In Alachua County, phosphates were discovered late in the 1870's, but as in other regions of Florida, the major developments in phosphate mining and processing began about 1889. The western part of Alachua County contained the major local deposits of rock phosphates Mines began to spring up after 1890, and by 1893, the Savannah, Florida, and Western Railway, already active in the area, extended its tracks southward from High Springs through the phosphate producing territory."

Continued on Reverse side.

Sponsored by the Alachua County Historical Commission, in co-operation with the Department of State.