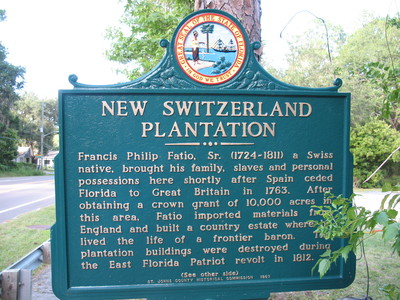 New Switzerland Plantation was located east of the St. Johns River .In 1771 Francis Phillip Fatio moved his family to East Florida and became resident manager of planting interests. It became one of the most prominent plantations.

" Francis Phillip Fatio, Sr. (1724 - 1811) a Swiss native, brought his family, slaves and personal possessions here shortly after Spain ceded Florida to Great Britain in 1763. After obtaining a crown grant of 10,000 acres in this area, Fatio imported materials from England and built a country estate where he lived the life of a frontier baron. The plantation buildings were destroyed during the East Florida patriot revolt in 1812."