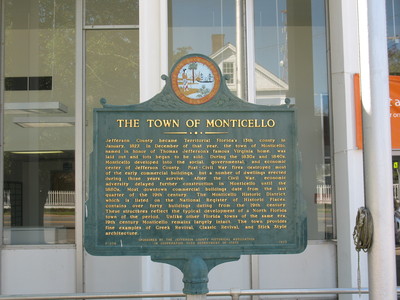 The Town Of Monticello Marker, Monticello, Fl. This marker is located on US 19 on the grounds of the Post Office, in Jefferson County, Florida.

" Jefferson County became Territorial Florida´s 13th county in January, 1827. In December of that year, the town of Monticello, named in honor of Thomas Jefferson´s famous Virginia home, was laid out and lots began to be sold. During the 1830s and 1840s, Monticello developed into the social, governmental, and economic center of Jefferson County. Post- Civil War fires destroyed most of the early commercial buildings, but a number of dwellings erected during those years survive. After the Civil War, economic adversity delayed further construction in Monticello until the 1880s. Most downtown commercial buildings date from the last quarter of the 19th century. The Monticello Historic District, which is listed on the National Register of Historic Places, contains over forty buildings dating from the 19th century. These structures reflect the typical development of a North Florida town of the period. Unlike other Florida towns of the same era, 19th century Monticello remains largely intact. The town provides fine examples of Greek Revival, Classic Revival, and Stick style architecture. "

Sponsors: The Jefferson County Historical Association in cooperation with Department of State 1977