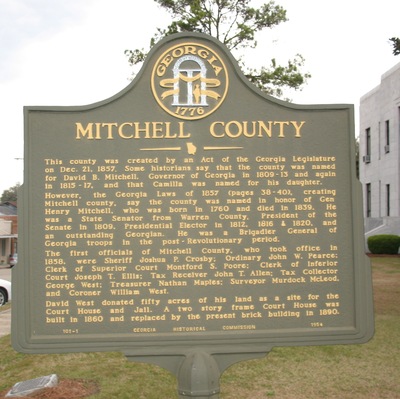 " This county was created by an Act of the Georgia Legislature on Dec. 21, 1857. Some historians say that the county was named for David B. Mitchell, Governor of Georgia in 1809-13 and again in 1815-17, and that Camilla was named for daughter. However, the Georgia Laws of 1857 (pages 38-40), creating Mitchell County, say the county was named in honor of Gen. Henry Mitchell, who was born in 1760 and died in 1839. He was a State Senator from Warren County, President of the Senate in 1809, Presidential Elector in 1812, 1816 & 1820, and an outstanding Georgian. He was a Brigadier General of Georgia troops in the post-Revolutionary period. The first officials of Mitchell County, who took office in 1858, were Sheriff Joshua R. Crosby; Ordinary John W. Pearce; Clerk of Superior Court Montford S. Poore; Clerk of Inferior Court Joseph T. Ellis; Tax Receiver John T. Allen; Tax Collector George West; Treasurer Nathan Maples; Surveyor Murdock McLeod; and Coroner William West. David West donated fifty acres of his land as a site for the Court House and Jail. A two story frame Court House was built in 1860 and replaced by the present brick building in 1890."