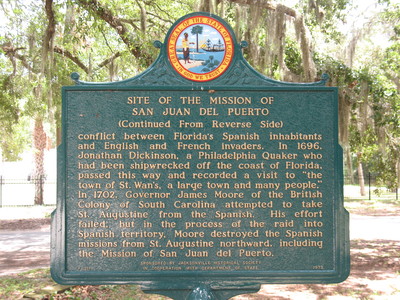 " The establishment of missions chiefly for the purpose of Christianizing the Indian population was one of the methods used by Spain in attempting to colonize Florida in the sixteenth century. The Mission of San Juan del Puerto was founded in the late 1500's by the Franciscan Order of friars to serve the Timucuan Indians living in the area. While working at this mission around 1600 Father Francisco Pareja prepared a Timucuan dictionary, grammar and several religious books in that language for use by the Indians. The Mission of San Juan del Puerto continued to exist throughout the seventeenth century in spite of the growing. "