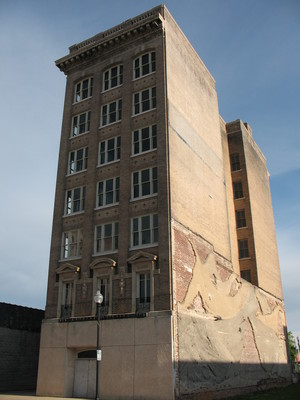 Former First National Bank building located in Gastonia, North Carolina. It was built between 1916-1917 in the Classical Revival architectural style and designed by Wilson & Sompayrac. This early twentieth century skyscraper was also known as the Lawyer's Building. From 1917 to 1933 the bank operated on the first two floors with offices rented out on the other floors. From 1934-1957, the building was owned by the National Bank of Commerce. From 1957-1982, it was known as the Lawyer's Building. The building is now being renovated into a luxury hotel. It is on the National Register of Historic Places (NRIS #86000301) and a part of the Downtown Gastonia Historic District.