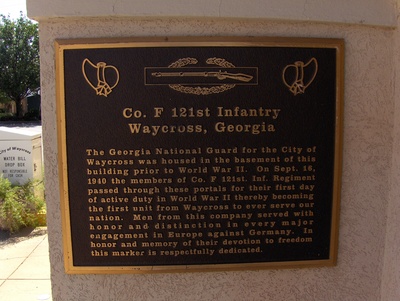 Waycross City Hall Plaque 2, GA. It was originally a YMCA built in 1907-1911. This plaque was dedicated to the members of the Co. F 121st. Infantry.
Transcription below:

"Co. F 121st Infantry. Waycross, Georgia
The Georgia National Guard for the City of Waycross was housed in the basement of this building prior to World War II. On Sept 16, 1940 the members of Co. F 121st Inf. Regiment passed through these portals for their first day of active duty in World War II thereby becoming the first unit from Waycross to ever serve our nation. Men from this company served with honor and distinction in every major engagement in Europe against Germany. In honor and memory of their devotion to freedom this marker is respectfully dedicated.