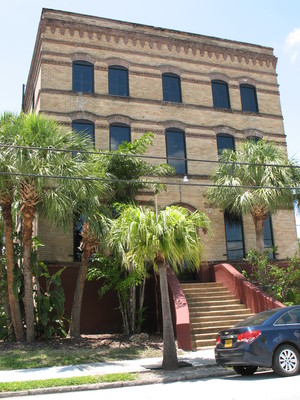 Former San Martin & Leon Cigar Factory located in Tampa, Florida. It was built circa 1900 in the Romanesque Revival architectural style. San Martin & Leon Cigar moved to the site in 1914 but before that is was home to two other cigar factories: A. Santaella & Co. until 1904 and then Leopold Powell & Co, until 1913. From 1928 forward it was home smaller cigar factories, a clubhouses for Spanish, Italian, American and Cubans, and Frayne Sportswear Manufacturing Inc. Currently, it is used as office space. This is a contributing building on the National Register of Historic Places (NRIS #83003539) and a part of the West Tampa Historic District.