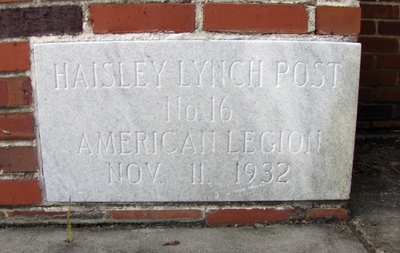 American Legion CS Gainesville, FL. The American Legion is a social and mutual-aid veterans' organization including members of the United States armed forces. The organization was founded in 1919 by veterans returning from Europe after World War I, The building was named for Haisley Lynch, one of the forty-three Alachua men and women who died in World War I. Haisley, though, was the only Alachua soldier who actually died in combat, To memorialize his courage, Post 16 became the Haisley Lynch Post This is a cornerstone on the wall of the building.