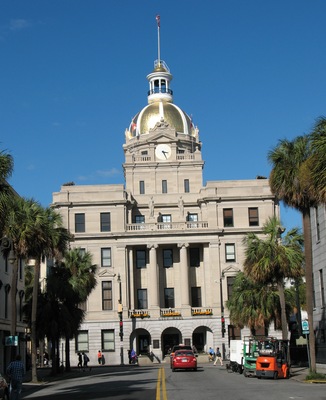 City Hall is the first building constructed by the citizens of Savannah expressly and exclusively to serve as the seat of municipal government. Opened on January 2, 1906, it has served continuously in this role since that date. City Hall was preceded on this site by the City Exchange, built in 1799 and razed in 1904. Along with municipal offices, the City Exchange housed the custom house, a post office, and newspaper offices.

City Hall was designed by Savannah architect Hyman W. Witcover and built 1904-1905 by the Savannah Contracting Company during the administration of Mayor Herman Myers. It is a Renaissance Revival structure of granite and limestone exterior. The original copper dome was first gold leafed in 1987.