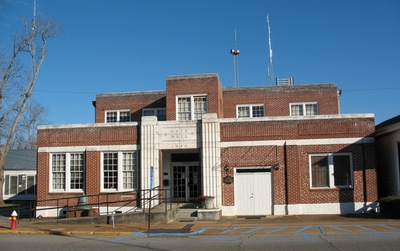 Cuthbert is the county seat and largest city of Randolph County in southwestern Georgia just northwest of Albany.It was named after John Alfred Cuthert, member of congress.

Cuthbert’s Mid-Century Modern City Hall was a project of the WPA, near the tail-end of funding for the New Deal agency. It’s a quiet landmark of governmental architecture and utilitarian design. The bell seen below lists the names of the committee members who oversaw its construction. It was built in 1940.