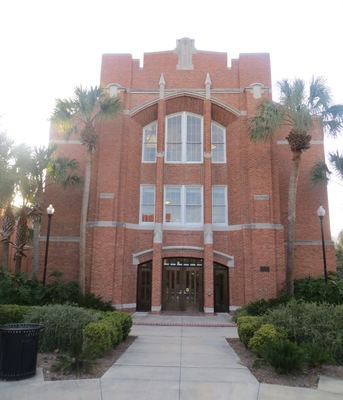 Kathryn Chicone Ustler Hall (formerly known as the Women's Gymnasium and University Gymnasium) is a historic building on the campus of the University of Florida in Gainesville, Florida. It was designed by William Augustus Edwards in the Collegiate Gothic style. On June 27, 1979, it was added to the U.S. National Register of Historic Places, NRIS #79000660 .

The building opened in 1919. It was designed as an assembly hall and sports venue, and was used for several years as the home of the Florida Gators men's basketball team. In 1948, the building was renamed the Women's Gymnasium and was used for hosting women's sporting events.

With a donation from sociology alumna Kathryn Chicone Ustler in 2000, the vacant gym was transformed into a 14,700-square-foot (1,370 m2) three story academic building. Now known as Ustler Hall, it houses the Center for Women's and Gender Studies Research. Ustler Hall is the only freestanding campus building in the United States devoted solely to Women’s Studies. This is the first building on the UF campus renamed to honor a woman.