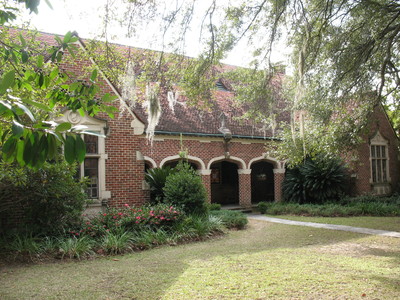 Ruge Hall, Chapel of the Resurrection

Ruge Hall (also known as the Chapel of the Resurrection) is a historic site in Tallahassee, Florida. It is located at 655 West Jefferson Street. On August 1, 1997, it was added to the U.S. National Register of Historic Places.

The Ruge Hall Episcopal Student Center was built by John G. Ruge of Apalachicola as a memorial to his wife, Fannie Ruge, in 1931. It was built to serve as the Episcopal Chapel of the Resurrection on the campus of Florida State College for Women. Ruge Hall served as a place for worship and fellowship, as well as a residence for the Episcopal Chaplain.

Designed by the prominent Tallahassee architect Edward D. Fitchner, the building, which served as the Episcopal student center, was the first religious facility affiliated with the Florida State College for Women, later Florida State University.