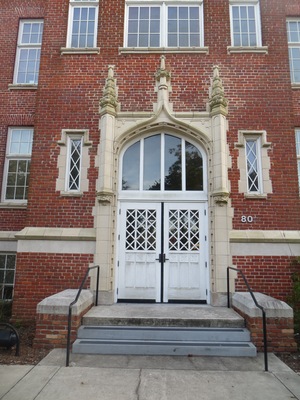 This is the front entrance door to the Keene-Flint Hall.

Originally called Science Hall, Flint Hall at one time housed the Florida State Museum, and was built in 1910. The Departments of Botany, Chemistry, Horticulture, Physics, Zoology and Bacteriology held classes on the first floor, while the museum occupied the second floor.

Renovations were made possible by a gift in 1997 from Kenneth and Janet Keene, whose support along with matching state funds also enabled the renovation of Anderson Hall. The name of Flint Hall was changed to Keene-Flint Hall in honor of the Keenes. This houses the History and Chemistry Department.