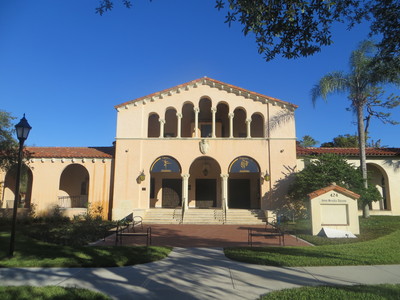 The Annie Russell Theatre was designed by Richard Kiehnel, who was responsible for establishing the College's defining architectural style. The Theatre and the neighboring Knowles Memorial Chapel were constructed in tandem and celebrated a joint dedication. It was built in 1931-32.

The Theatre was a gift of Mrs. Edward W. Bok in honor of her friend Annie Russell, an actress of international renown. Miss Russell returned to the stage to act in the Theatre's inaugural production and assisted in building the College's dramatic arts program, which has produced award-winning stage and film actors, directors, and writers.

The longest continuously operating theater in Florida and named to the National Register of Historic Places, the Annie Russell Theatre stages an exciting season of musicals and plays that feature student performers.