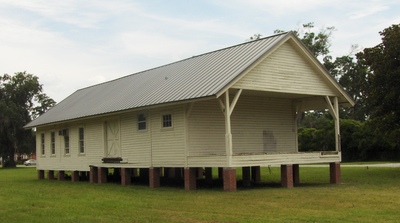 Constructed after a 1914 fire destroyed its predecessor, the depot served its railroad duties for much of the twentieth century before its abandonment. For many years such well-known passenger trains as the Orange Blossom Special, the Silver Meteor, and the Palmland passed by this depot. It was owned by CSX for 80 years, after which it donated the building to the City of Kingsland.

After being given to the City of Kingsland in 2005, it was moved a few blocks. In May 2012, it opened as the Welcome Center for the historic Kingsland Downtown District and trailhead for the Okefenokee Trail & Downtown Development Authority Office and Transportation/History museum.