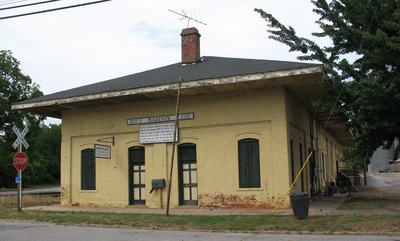 Madison's Georgia Railroad depot is one of the oldest in the state. Built in the 1840s (or perhaps in 1857-58, suggests Wilber Caldwell), it has stood here for at least a century and a half. Parts of the building were set afire by Union troops in 1864, but the damage was repaired the following year. The board on the wall reads as ; Georgia Railroad chartered in 1833 reached Madison from Augusta in 1841. This, the first brick station in georgia, was built by John B. Walker on land deeded by Adam B. Saffold. It was partially burned by federal troops Dec. 3, 1864. the first train from Madison to Marthasville(Atlanta) ran on September 15, 1845.