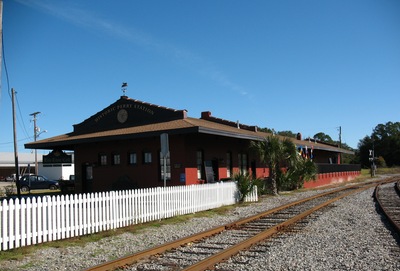 Live Oak, Perry & South Georgia Railway (reporting mark LOPSG) was a 123-mile-long Class III railroad that operated freight service in the U.S. between Florida and Georgia from its 1971 creation, which was the result of a merger, until it was merged into the Norfolk Southern Railway (NS) in 1994.

The railroad tracks welcome you to downtown Perry, along with the town's old train station which is now a welcome center. The station was build by the Live Oak, Perry & Gulf Railroad in 1918. The line was purchased by Southern Railway in 1954. The depot was restored, and in 2013 was used as office and retail space. In 2013, Georgia & Florida Railway operated the line. Owned and operated by Southern Railway, the LOP&SG was created by the 1971 merger of the South Georgia Railway (Adel, Ga. to Perry, Fla.) and the Live Oak, Perry & Gulf Railroad, a rail line in northern Florida. The LOP&SG was consolidated into Norfolk Southern in 1991 but was sold in 1995. It became the Live Oak, Perry & Georgia operated by Georgia & Florida Railnet.