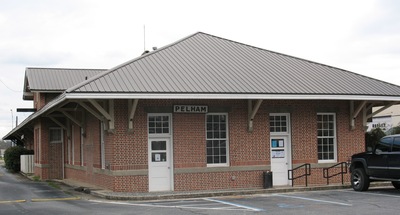 This depot was built in the 1860's by Southern Georgia and Florida Railroad. It became the Atlantic and Gulf and later the Savannah, Florida and Western Railroad. In 1902 the Atlantic Coast Line bought the station. The Station has a large open air Freight Depot on the South side. It now serves as the Chamber of Commerce and previously was City Hall of Pelham, Ga.