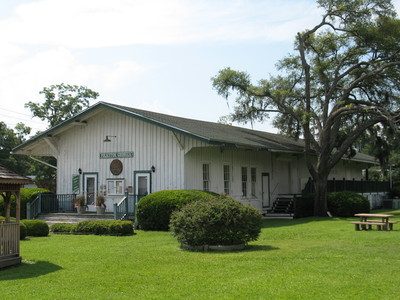 Folkston's Atlantic Coast Line depot, with its board-and-batten exterior and widely overhanging roof, represents a good example of a standard design approach used by ACL (and predecessor SF&W) across southern Georgia. Folkston is located on the CSX Transportation double-track main line 40 miles north of Jacksonville, Florida. To many rail fans, it is known as "the CSXT funnel out of Florida," or "The Folkston Funnel."

A covered train viewing platform became reality in 2001 to the delight of train fans from near and far who come to visit the famous Folkston Funnel. Free WiFi service for laptop computers was added during the summer of 2006. In addition, the city provides benches, chairs, picnic tables, BBQ pits and rest rooms. Depot Folkston, GA.