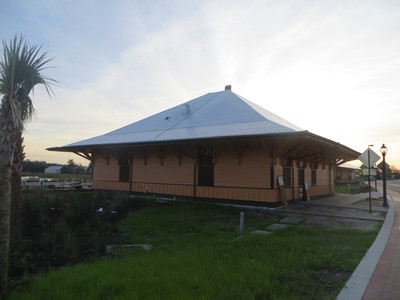 The Old Gainesville Depot (also known as the Seaboard Air Line Depot or Baird Warehouse) is a historic site at 203 Southeast Depot Avenue in Gainesville, Florida. It was added to the U.S. National Register of Historic Places, NRIS #96001369 on November 22, 1996.

Part of the Depot was built around 1860 to serve the Florida Railroad, which reached Gainesville from Fernandina in 1859. The depot was situated with tracks on both sides. Between 1892 and 1897 the depot was remodeled to provide two passenger waiting rooms, one for whites and one for Blacks. After the railroad opened the new depot, the old depot building was used by Baird Hardware, Gator Ice and Voyles Appliance store

The depot has been restored, and painted in the same colors, and with the same style metal roof shingles, used in 1910. The freight scale in the depot has also been restored. The restored depot is part of the Depot Park being developed by the city. The station is located along the Gainesville-Hawthorne Trail State Park