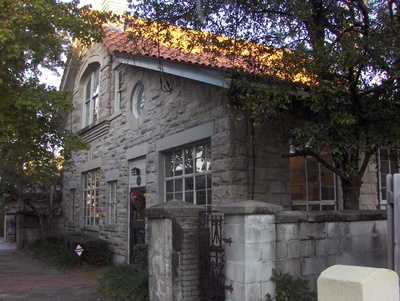 This was built in 1905. Architect Rutlege Holmes was commissioned by Colonel Raymond Cay to design an exotic Mediterranean-style mansion for him on Riverside Avenue. His mansion on Riverside’s famed “Row,” with its Rococco ceilings, ornate woodwork and colorful stained glass, hosted many a glittering party attended by the top tier of Riverside society.

Later it was sold to the Vignutti family. Today, the salon is a bustling business in the heart of Riverside, just steps from beautiful Memorial Park. Its first floor is divided into retail space and stylist stations, while the soothing, neutral-toned second floor holds Cecil’s work area and a small room for spa services.