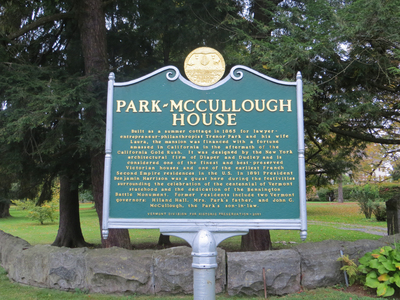 "Built as a summer cottage in 1865 for lawyer-entrepreneur-philanthropist Trenor Park and his wife Laura, the mansion was financed with a fortune amassed in California in the aftermath of the California Gold Rush. It was designed by the New York architectural firm of Diaper and Dudley and is considered one of the finest and best-preserved Victorian houses and one of the earliest French Second Empire residences in the U.S. In 1891 President Benjamin Harrison was a guest here during the festivities surrounding the celebration of the centennial of Vermont statehood and the dedication of the Bennington Battle Monument. Former residents include two Vermont governors: Hiland Hall, Mrs. Park's father, and John G. McCullough, the Park's son-in-law."