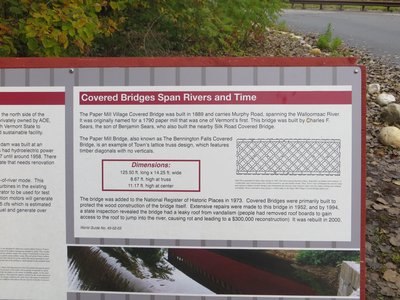 Paper Mill Bridge Sign, Bennington, Vermont. Inscription: "Covered Bridges Span Rivers and Time. The Paper Mill Village Covered Bridge was built in 1889 and carries Murphy Road, spanning the Walloomsac River. It was originally named for a 1790 Paper mill that was one of Vermont's first. This bridge was built by Charles F. Sears, the son of Benjamin Sears who also built the nearby Silk Road Covered Bridge.

The Paper Mill Bridge, also known as The Bennington Falls Covered Bridge, is an example of Town's lattice truss design, which features timber diagonals with no verticals. The bridge was added to the National Register of Historic Places in 1973. Covered Bridges were primarily built to protect the wood construction of the bridge itself. Extensive repairs were made to this bridge in 1952, and by 1994, a state inspection revealed the bridge had a leaky roof from vandalism (people had removed roof boards to gain access to the roof to jump into the river, causing rot and leading to a $300,000 reconstruction). It was rebuilt in 2000.