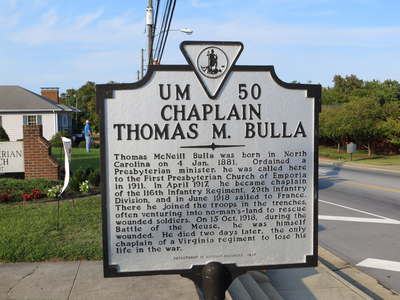 "Thomas McNeill Bulla was born in North Carolina on 4 Jan. 1881. Ordained a Presbyterian minister, he was called here to the First Presbyterian Church of Emporia in 1911. In April 1917, he became chaplain of the 116 Infantry Regiment, 29th Infantry Division, and in June 1918 sailed to France. There he joined the troops in the trenches, often venturing into no-man's-land to rescue wounded soldiers. On 15 Oct. 1918, during the Battle of the Meuse, he was himself wounded. He died two days later, the only chaplain of a Virginia regiment to lose his life in the war."