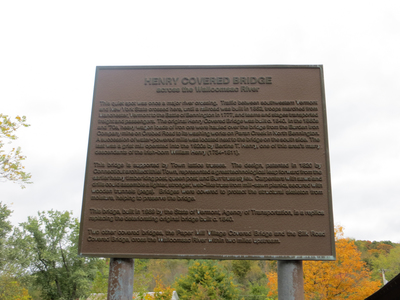 This quiet spot was once a major river crossing. Traffic between southwestern Vermont and New York State crossed here, until a railroad was built in 1852, troops marched from Manchester, Vermont to the Battle of Bennington in 1777, and teams and states transported freight and passengers. The original Henry Covered Bridge was built c. 1840. In the 1860s and '70s, heavy wagon loads of iron ore were hauled over the bridge from the Burden Iron Company mine on Orebed Road to its washing works on Paran Creek in North Bennington. A succession of water-powered mills was located next to the bridge on the south side. The last was a grist mill operated into the 1920s by Bertine T. Henry, one of this area's many descendants of the Irish-born William Henry (1734-1811).

This bridge is supported by town lattice trusses. The design, patented in 1820 by Connecticut architect Ithiel Town, represented a great technological leap forward from the earlier heavy timber king post, queen post, and Burr truss styles. Carpenters with saws and drills could assemble a lighter, stronger, web-like truss from mill-sawn planks, secured with wooden trunnels (pegs). Bridges were covered to protect the structural skeleton from moisture, helping to preserve the bridge.

This bridge, built in 1989 by the State of Vermont, Agency of Transportation, is a replica replacing the deteriorating original bridge built c. 1840.