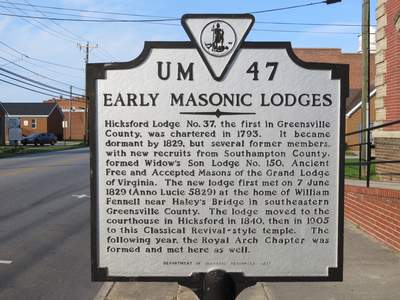 "Hicksford Lodge No. 37, the first in Greensville County, was chartered in 1793. It became dormant by 1829, but several former members with new recruits from Southampton County, formed Window's Son Lodge No. 150, Ancient Free and Accepted Masons of the Grand Lodge of Virginia. The new lodge first met on 7 June 1829 (Anno Lucie 5829) at the home of William Fennell near Haley's Bridge in southeastern Greensville county. The lodge moved to teh courthouse in Hicksford in 1840, then in 1905 to this Classical Revival--style temple. The following year, the Royal Arch Chapter was formed and met here as well."