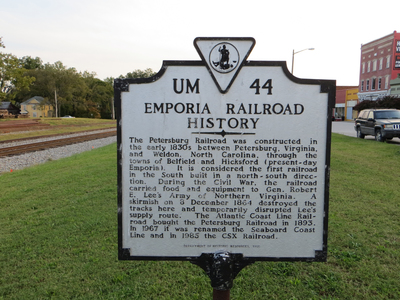 The Petersburg Railroad was constructed in the early 1830s between Petersburg, Virginia, and Weldon, North Carolina through the towns of Belfield and Hicksford (present-day Emporia). It is considered the first railroad in the South built in a north-south direction. During the Civil War, the railroad carried food and equipment to Gen. Robert E. Lee's Army of Northern Virginia. A skirmish on 8 December 1864 destroyed the tracks here and temporarily disrupted Lee's supply route. The Atlantic Coast Line Railroad bought the Petersburg Railroad in 1893. In 1967 it was renamed the Seaboard Coast Line and in 1985 the CSX Railroad.