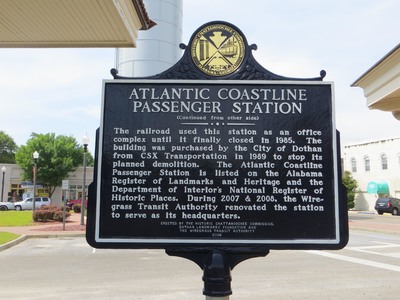 The marker reads: “ATLANTIC COASTLINE PASSENGER STATION (Continued from other side) -- The railroad used this station as an office complex until it finally closed in 1985. The building was purchased by the City of Dothan from CSX Transportation in 1989 to stop its planned demolition. The Atlantic Coastline Passenger Station is listed on the Alabama Register of Landmarks and Heritage and the Department of Interior’s National Register of Historic Places. During 2007 & 2008, the Wiregrass Transit Authority renovated the station to serve as its headquarters. ERECTED BY THE HISTORIC CHATAHOOCHEE COMMISSION, DOTHAN LANDMARKS FOUNDATION AND THE WIREGRASS TRANSIT AUTHORITY 2008"