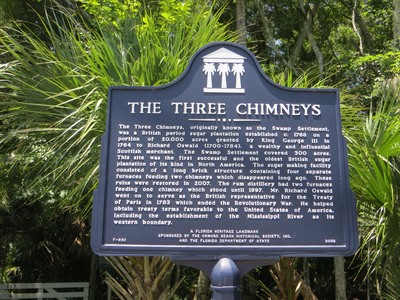 The marker reads: "THE THREE CHIMNEYS -- The Three Chimneys, originally known as the Swamp Settlement, was a British period sugar plantation established c. 1768 on a portion of 20,000 acres granted by King George III in 1764 to Richard Oswald (1700-1784), a wealthy and influential Scottish merchant. The Swamp Settlement covered 300 acres. This site was the first successful and the oldest British sugar plantation of its kind in North America. The sugar making facility consisted of a long brick structure containing four separate furnaces feeding two chimneys which disappeared long ago. These ruins were restored in 2007. The rum distillery had two furnaces feeding one chimney which stood until 1997. Mr. Richard Oswald went on to serve as the British representative for the Treaty of Paris in 1783 which ended the Revolutionary War. He helped obtain treaty terms favorable to the United States of America, including the establishment of the Mississippi River as its western boundary. F-680 A FLORIDA HERITAGE LANDMARK SPONSORED BY THE ORMOND BEACH HISTORICAL SOCIETY, INC. AND THE FLORIDA DEPARTMENT OF STATE 2008" Top of sign: Florida Heritage emblem