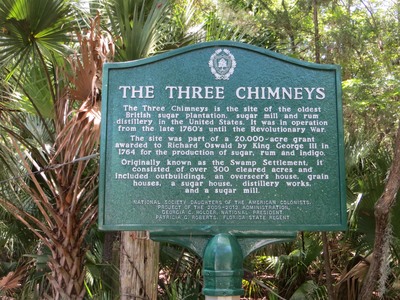 The marker reads: "THE THREE CHIMNEYS The Three Chimneys is the site of the oldest British sugar plantation, sugar mill and rum distillery in the United States. It was in operation from the late 1760's until the Revolutionary War. The site was part of a 20,000-acre grant awarded to Richard Oswald by King George III in 1764 for the production of sugar, rum and indigo. Originally known as the Swamp Settlement, it consisted of over 300 cleared acres and included outbuildings, an overseer's house, grain houses, a sugar house, distillery works, and a sugar mill. NATIONAL SOCIETY DAUGHTERS OF THE AMERICAN COLONISTS. PROJECT OF THE 2009-2012 ADMINISTRATION GEORGIA C. HOLDER, NATIONAL PRESIDENT PATRICIA G. ROBERTS, FLORIDA STATE REGENT" Top of the sign: Emblem for National Society Daughters of the American Colonists