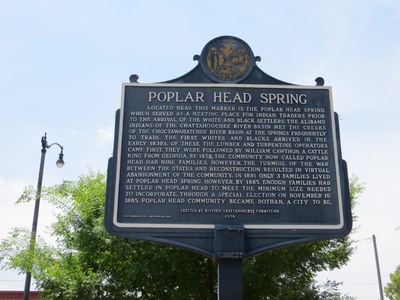 The marker reads: "POPLAR HEAD SPRING -- Located near this marker is the Poplar Head Spring which served as a meeting place for Indian traders prior to the arrival of the white and black settlers. The Alibamu Indians of the Chattahoochee River basin met the Creeks of the Choctawahatchee River basin at the springs frequently to trade. The first whites and blacks arrived in the early 1830’s. Of these the lumber and turpentine operators came first. They were followed by William Cawthon, a cattle king from Georgia. By 1858, the community now called Poplar Head had nine families. However, the turmoil of the War Between the States and Reconstruction resulted in virtual abandonment of the community. In 1881, only 3 families lived at Poplar Head Spring. However, by 1885, enough families had settled in Poplar Head to meet the minimum size needed to incorporate. Through a special election on November 10, 1885, Poplar Head community became Dothan, a city to be. ERECTED BY HISTORIC CHATTAHOOCHEE COMMISSION 1978 J.J. JAXON CO. -EUFAULA, AL.". Top of the sign: Historic Chattahoochee Commission Alabama-Georgia emblem.