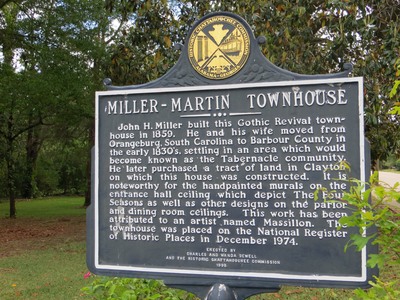 The marker reads: "MILLER-MARTIN TOWNHOUSE -- John H. Miller built this Gothic Revival townhouse in 1859. He and his wife moved from Orangeburg, South Carolina to Barbour County in the early 1830s, settling in an area which would become known as the Tabernacle community. He later purchased a tract of land in Clayton on which this house was constructed. It is noteworthy for the handpainted murals on the entrance hall ceiling which depict The Four Seasons as well as other designs on the parlor and dining room ceilings. This work has been attributed to an artist named Massillon. The townhouse was placed on the National Register of Historic Places in December 1974. ERECTED BY CHARLES AND WANDA SEWELL AND THE HISTORIC CHATTAHOOCHEE COMMISSION 1999". Top of the sign: Historic Chattahoochee Commission Alabama-Georgia emblem.