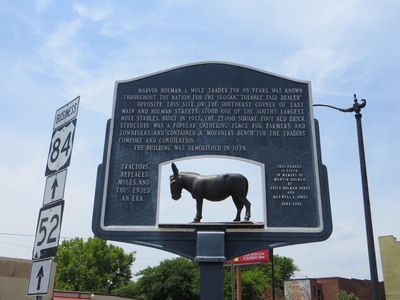 The marker reads: "Marvin Holman, A mule trader for 65 years, was known throughout the nation for the slogan,"'Tolable' fair dealer". Opposite this site, on the southeast corner of East Main and Holman Streets stood one of the south's largest mule stables. Built in 1917, the 27,000 square foot red brick structure was a popular gathering place for farmers and townfolks and contained a "Mourners bench" for the Traders' comfort and consolation. The building was demolished in 1974. Tractors replaced mules, and thus ended an era. THIS PLAQUE IS GIVEN IN MEMORY OF MARVIN HOLMAN BY EDITH HOLMAN JONES AND MAXWELL E. JONES JUNE 1981"