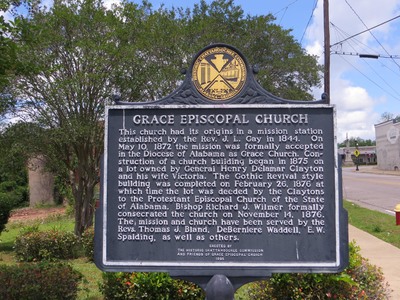 The marker reads: "GRACE EPISCOPAL CHURCH -- This church had its origins in a mission station established by the Rev. J. L. Gay in 1844. On May 10, 1872 the mission was formally accepted in the Diocese of Alabama as Grace Church. Construction of a church building began in 1875 on a lot owned by General Henry Delamar Clayton and his wife Victoria. The Gothic Revival style building was completed on February 26, 1876 at which time the lot was deeded by the Claytons to the Protestant Episcopal Church of the State of Alabama. Bishop Richard J. Wilmer formally consecrated the church on November 14, 1876. The mission and church have been served by the Revs. Thomas J. Bland, DeBerniere Waddell, E. W. Spalding, as well as others. ERECTED BY THE HISTORIC CHATTAHOOCHEE COMMISSION AND FRIENDS OF GRACE EPISCOPAL CHURCH 1995" Historic Chattahoochee Commission Alabama-Georgia emblem at the top of the sign.