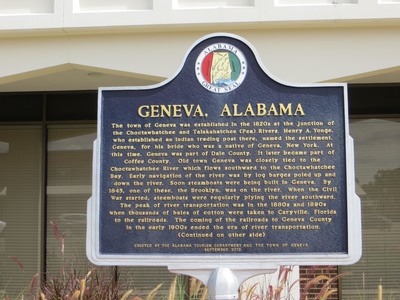 The marker reads: "GENEVA, ALABAMA -- The town of Geneva was established in the 1820s at the junction of the Choctawhatchee and Talakahatchee (Pea) Rivers. Henry A. Yonge, who established an Indian trading post there, named the settlement, Geneva, for his bride who was part of Dale County. It later became part of Coffee County. Old town Geneva was closely tied to the Choctawhatchee River which flows southward to the Choctawhatchee Bay. Early navigation of the river was by log barges poled up and down the river. Soon steamboats were being built in Geneva. By 1845, one of these, the Brooklyn, was on the river. When the Civil War started, steamboats were regularly plying the river southward. The peak of river transportation was in the 1880s and 1890s when thousands of bales of cotton were taken to Caryville, Florida to the railroads. The coming of the railroads to Geneva County in the early 1900s ended the era of river transportation. (Continued on other side) ERECTED BY THE ALABAMA TOURISM DEPARTMENT AND THE TOWN OF GENEVA SEPTEMBER 2010". Image of Alabama Great Seal at the top of the sign.